Challenges
Improvements
We used to outsource printing on plastic parts and metallic plates, laser cutting acrylic plates, etc. in the process of manufacturing products, which took us a lot of time and money.
It became possible to do the laser cutting and printing processes in-house, which led to a cost reduction. We could also reduce the time for prototype production, which enabled us now to make various proposals. 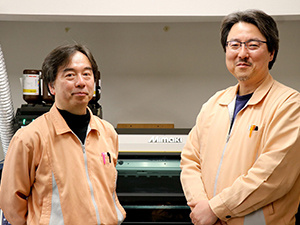 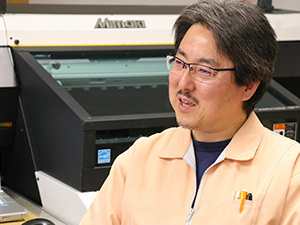 Being a machine-loving kid, I spent almost every day of my childhood doing things like checking inside broken electric appliances to find out how they are built, and taking radios apart then reassembling them. Naturally, I have grown into an adult who loves electricity and circuit, by which I make my living today.

As a matter of course, I first joined a company and was engaged in various jobs such as manufacturing electronic device parts and software development. While building my carrier, I came to have a stronger passion to become independent and create my own business. So I set up L and F Co., Ltd. with Mr. Akira Ichikawa in whom I found congenial spirit through jobs at that time. Later, we were joined by Mr. Jiro Yamagami from an electronic component trading company, and have gradually grown while increasing the number of employees in the past 23 years.

We are an independent system house that provides total support of hardware/software development for electronic devices mainly of embedded microcomputer system. We are also a manufacturer of embedded device development equipment that sells development environments and substrate systems. We hope to be a proposal-oriented partner that realizes optimum approaches to meet customers' demand rather than being just a subcontracting firm. In this regard, we take pride in having the know-how to realize it.

As we pursue exciting jobs, things we want to do in-house increase. 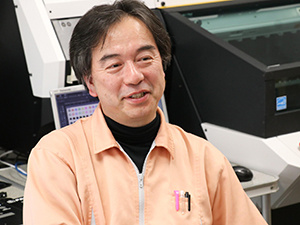 We do not basically do so-called sales activities and sales channel development efforts. In this industry, the word-of-mouth communication is more crucial than one might think. While we keep on taking jobs from companies, organizations, and universities in various industries, we receive inquiries for the next jobs. Thankfully, that's the flow of business we have now. This, off course, is based on the premise that we earnestly address the jobs we accept, and gain the customers' trust and satisfaction.

As one of our recent jobs, we were engaged in development and manufacturing of PASTA, a highly extensible portable automotive security test bed, together with the research arm of Toyota Motor Corp.

Cyber attacks targeting cars are increasing nowadays. In order to protect cars against such attacks, future auto development must be addressed while keeping a close eye on the cyber security threat. PASTA was developed to be an open platform to consider the cyber security of automobile, and can be used to evaluate technologies for security measures as well as education for security.

UJF-6042MkII and Epilog Helix 24* made a contribution to completion of PASTA.

PASTA has all the functions built in a trunk. We produced the panels and switches required to commercialize it, all in-house.

What played active roles in this project were MIMAKI's UJF-6042MkII and Epilog Laser's Epilog Helix 24. For years, we have had processes of printing on plastic parts and metallic plates, laser cutting acrylic plates, etc. to manufacture products. As we used to outsorce those processes, they took us a lot of cost and time.

To explore the way to solve this issue, we researched UV printers and visited several other manufacturers, and the last one we visited was MIMAKI.What struck us was the outstanding credible explanation they provided and their sincere way of addressing difficult test print. Although the price was higher than others, the color development was superior and quality level was high. Above all, we felt the enthusiasm and commitment of the sales person, which encouraged us to introduce UJF-6042MkII.

This printer allowed us to directly print even on the tall trunk used as a case of PASTA. This made us realize that it provides extended range of uses, which became a decisive factor in determining the introduction. Also, we decided to introduce Epilog Helix 24 partly because Tokyo metropolitan government offered subsidies in 2019.

Introduction of these 2 machines made it possible to do the panel laser cutting and printing processes all in-house, which lead to a time and cost reduction. In addition, it became easier to try producing prototypes, which helped us to make wider range of proposals.

* Epilog Helix 24 can be purchased through Mimaki Engineering. For information on introduction outside Japan, please direct your inquiry to Mimaki. 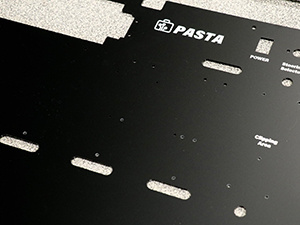 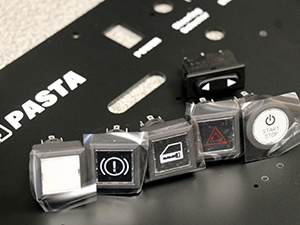 Continue to take on new challenges with MIMAKI's machines

Itabashi-ku, which we are based in, provides substantial support to enterprises. They annually hold an industry exhibition called "Itabashi Industrial Trade Fair" where enterprises in Itabashi-ku get together to showcase and promote their products and technologies. Also, there is an award called "Itabashi Product Technology Award" offered to get publicity for the developing and engineering power of the enterprises in Itabashi-ku and to promote industrial development.

We won the Jury's Special Award in 2014 for the "USB memory and serial reader/writer for embedded device LFA62". Receiving subsidies and other supports from the governments, we will continue to aggressively pursue "exciting jobs".

Obviously, we set our sights on developing products in addition to components. So we think there will be more scenes where UJF-6042MkII will be used actively.

Since MIMAKI has solid technical support and sales support system in case of machine troubles, we always feel a sense of security. Our only regret is the ink. In small-lot printing like ours, the inks expire before they are consumed. We think it is a shame and feel so wasteful. So we expect new technologies and support to solve this issue. 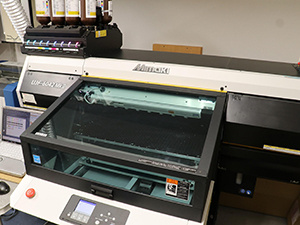 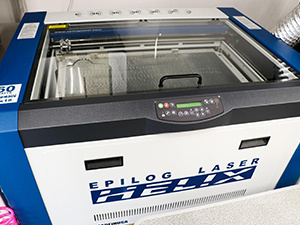 The business was started in 1996 by two founders, Mr. Sugawara and Mr. Ichikawa. In March of the following 1997, they established L and F Co., Ltd. For 23 years since then, the company has received various orders from companies, organizations and universities in a wide variety of industries, and also engage in development and sale of its own products.