Challenges
Improvements
The Team was seeking for large-format machines capable of high speed output as the maintenance period of the previous "M-64s" was drawing to a close.
"JV330-130" was then introduced, and the machine is operating without problems ever since. The printer, with its high quality, stability, and speed in general output mode, has successfully replaced the "M-64s".

Established about 20 years ago, Team Inc. initially started out as a division of ZENYU-INSATSU CO., LTD., and spun off as an independent company in 2009. The firm is well known in the Kanto region as a company capable of handling everything from large-format printing to installation.
We interviewed President Yusuke Inoue, who led the company since its spin-off: 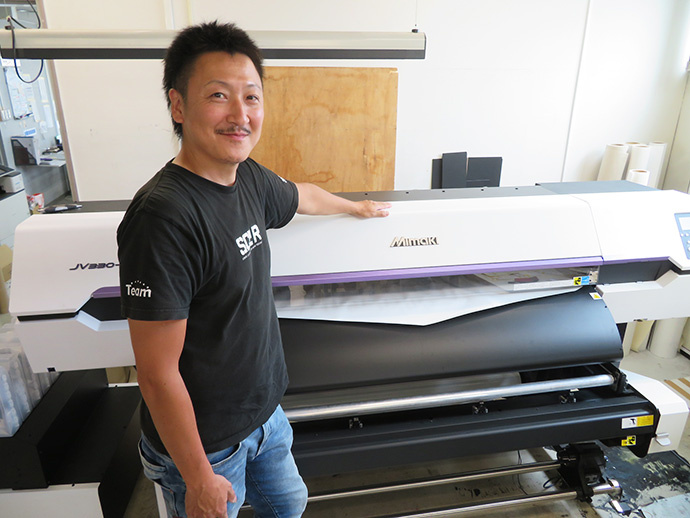 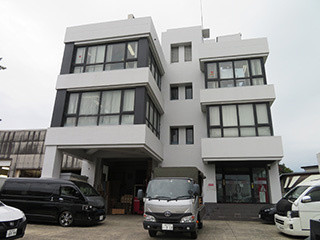 Team Inc. operates in the same building even after breaking away from ZENYU-INSATSU company.

Engaging in large-format print sales, I came to realize electrostatic printing was not the right thing. It was becoming outdated, because of the expensive toner and media and the low productivity. In fact, we were not getting many orders for large-format print jobs, and profitability was low.

We looked into solvent inkjet printers, and found them to be affordable, the printers, ink and the media and all. We thought, "We can expect profitability with these printers." Once we actually introduced them, the lease price plummeted to less than one-tenth of the former price, and inexpensive media also became available.
From that point on, division sales began rising steadily, and jobs started to come in one after another.
We also introduced Mimaki Engineering printers around then.

After going independent, Team Inc. made it a work stance to "take on anything that comes."
We did tele-appointments, and some of our customers we carried over from since the days of ZENYU-INSATSU company. The four employees with us at the time worked without a break to handle the gradually increasing number of customers and jobs, increasing our sales.
Back then, we put in too much work -- no vacations, and work continued until late at night. It was distinctly detrimental, even causing several employees to leave the company.
In remorse, we rethought the company work style about eight years ago. We adopted a policy of having most weekends off and going home by 6:00 PM every day.

This new policy is all about focusing on high value-added work demanding our skills, providing generous services to customers who recognize these attributes.
The vehicular wrapping business, in particular, has become a pillar of our business, matching our corporate policy.

Mimaki printers meets our expectations for high productivity and stability, closely matching our policy of completing jobs quickly and in a short period of time. 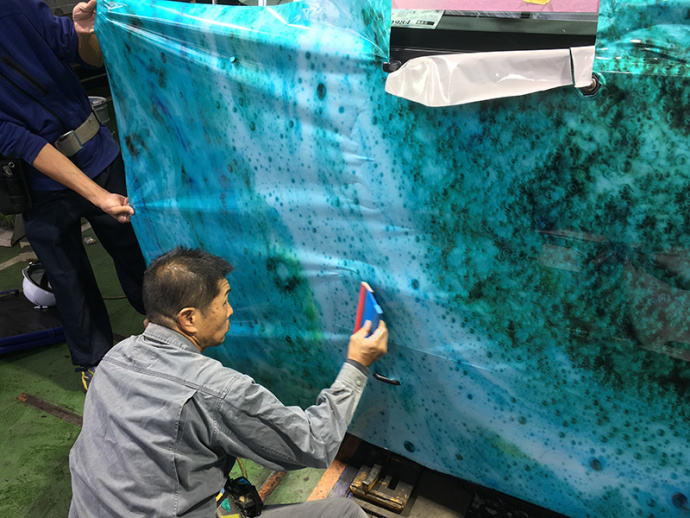 We included "JV330-130" in our printer lineup at the end of April this year (2022).
I have always been a big fan of Mimaki, constantly on the lookout for new inkjet printers from the company.
As I mentioned earlier, the printer we introduced at the time of the company's founding gave us very stable output and helped us with our work. Since then, the work style of the entire company has been centered around Mimaki printers.
At the moment, we have the "JV300-130 Plus", "JV300-130", and the "UJV55-320" in our facilities, all operating stably.

Although we tried out solvent-based printers from other companies, color results were completely different for orders requiring the same design received a month apart in one of our jobs, and we could not adjust the output.
As Mimaki printer users, we have always taken it for granted that the same printer would constantly end up with the same results, but that machine was different. We could not trust it to accomplish jobs with confidence.
Mimaki printers are another story, and we could trust them with our work. Mimaki became our printers of choice when it comes to works likely to be repeated, and opportunities to use them increased even more.
On the other hand, printers with unstable color results were used less and less. Because of this, it took additional time to clean the print heads and start up for test prints. 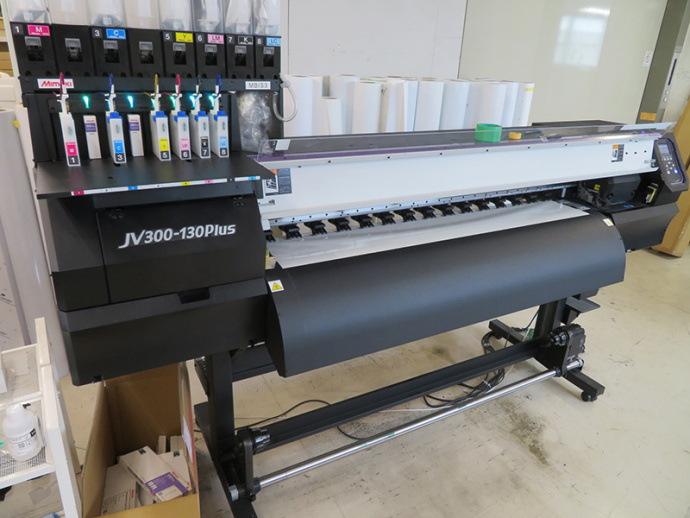 "JV300-130 Plus," previous workhorse of the corporate printer lineup 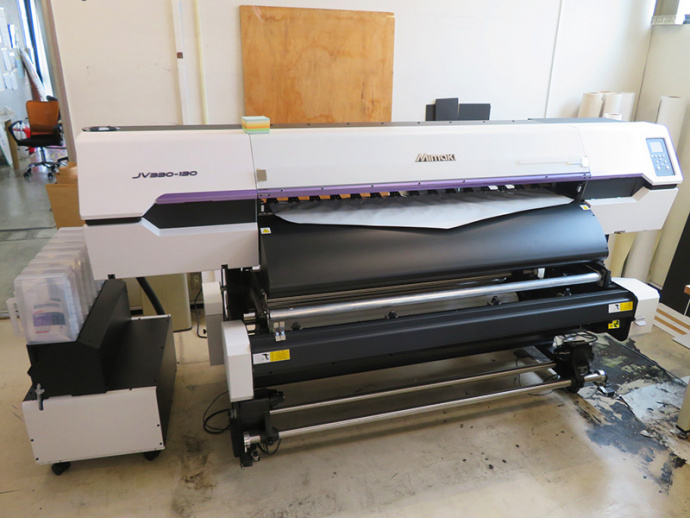 As for the "JV330-130," we jumped to procure the machine immediately when we found the announcement of the new product and saw its product specifications. Based on experience, naturally.
What we wanted was a printer tailored to large-format, high-speed output. The "M-64s" printers manufactured by OKI which Mimaki had been selling, had just reached the end of their maintenance period. So, we thought this product would be a suitable replacement.
The "M-64s" were also fast machines producing stable output, but I preferred the RIP software supplied from Mimaki, and found it easier to use, so I was the one who really wanted the replacement.
The shift went smoothly and the familiar RIP output is satisfying. I am happy with the replacement.

The "JV300" series in our company is the mainstay of vehicular wrapping output, but since the output speed for 8-colored (C/M/Y/K/Lc/Lm/Lk/Or) prints is limited to 22.7 m2/h, we were having problems of being fully occupied for over a week when high-volume jobs came in.

As I mentioned earlier, our strongest business is wrapping, and the most common application is wrappings on commercial vehicles such as cabs and buses. Since there are cases where large number of vehicles are involved, we hope to assign "JV330-130" to such jobs, differentiating from the "JV300" series.
We also have the opportunity to undertake wrappings for temporary construction fences, and we believe "JV330-130" will prove its strength in such large-area jobs as well.

Since the introduction at the end of April, we have gradually tried the machine out, conducting tests on the way. We are under the impression that the quality is high, stable, and fast in general output mode, as is typical of Mimaki products.
Current output is at least 20 meters per day and sometimes in excess of 100 meters on the highest days. Firms taking on jobs requiring the output of a fixed number of square meters would definitely want one of these machines.

Wrappings to render images into form

The most difficult segment of vehicular wrapping is the output and application of wrappings for personal automobiles. Naturally, owners have strong attachments with these cars, and we sometimes receive orders to apply wrapping to so-called "itasha (painted cars)." Most of these orders involve characters from anime, manga, and video games, and are produced on the "JV300-130 Plus" and other printers.

Regardless of whether it is a commercial or personal vehicle, it is essential to visualize the final result, sharing the same image with the customer prior to the actual wrapping application.
At Team Inc., the print data is processed to create a computer graphics image of the state of application on the customer's vehicle, simulating the actual after-image of the application. When we show this data to our customers, they are often amazed:  "Have you finished the wrapping already?" is a common reaction we often see. Using the generated imagery, we only proceed to the actual application only after the customer is satisfied with the end result. In this process, we are able to provide a very high level of satisfaction even with the most demanding privately owned cars, and we are able to provide a finish that makes people say, "You can't go wrong with them."
Even for the most difficult of jobs, delivery time is from one to two weeks from the image setting to the application. 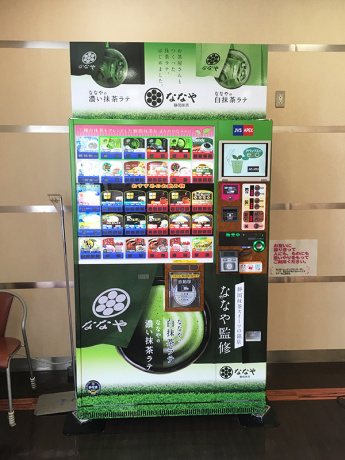 Expanding the scope of work with cup-vending machine wrappings

In addition to automobiles, we are also into wrappings for cup vending machines.
We have some major vending machine companies as our customers, and we thought, promoting the installation of vending machines may also expand opportunities for our wrapping business.

So, we came up with a site on vending machine wrappings to be used as a sales tool by vending machine company representatives, devising a system to allow them to use tablets and other devices when proposing the installation of vending machines. At the same time, we provided information on wrappings within the site. The number of vending machines with wrappings applied is gradually increasing, and some of the salespeople are using this system with great success.

Since we are good at generating design data and other digital-related services, we are also able to provide services such as the above.

Specializing as a wrapping application company

We intend to proceed with the specialization in wrappings and improve our skills. We intend to enhance our position in the field of wrapping, taking advantage of our strength in being capable of consistently handling everything from image proposals to design, output, and application. Since we have a lot of experience in vehicular wrapping and have a good understanding of how to apply whatever design is required, we have acquired a reputation for "making fewer mistakes."

In addition, we have recently obtained an antique dealer's license and are looking for new business opportunities utilizing our wrapping skills.
I myself, would like to keep up with my efforts to enhance our brand power so that our company name "Team" will be better known.