Challenges
Improvements
To express a variety of image designs, all printing methods should be employed.
After installing UJF-605C, the company learned a possibility of UV-curable inkjet printer. Especially white ink, this color extends a range of print designs.

Technology and expressiveness which make the impossible possible. Lay out a new possibility of the inkjet technology. 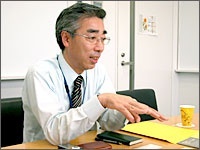 【Business development, taking advantage of the integrated power of the three companies】
In 1946, Yoshida Industry Manufacturing,the predecessor of YOSHIDA group, started up the business dealing with the molding processing of synthetic resin. After converted to joint stock corporations, the company expanded into the injection-molding market. To improve the operation, they made the sales department independent, and established YOSHIDA INDUSTRIES CO,.LTD. in 1958. After that, they built plants all over Japan, and established business bases focusing around Tokyo metropolitan area. At the same time, they were active in oversea development, such as manufacturing in China, and business alliance with French company.

On June, 2004, Yoshida Industry was devided into "YOSHIDA COSMEWORKS CO., LTD." which handles the cosmetic-related container, and "YOSHIDA TECNOWORKS CO,.LTD." which deals with the communication device associated part. YOSHIDA INDUSTRIES CO., LTD. takes the role of manufacturing. Now, YOSHIDA group utilizes the total capability of the three companies, and produces several new products by innovative reserch and development with considering the market demands.

【Focus on the beauty and fashionability】
"We have produced the cosmetics related container since the time our company name was Yoshida Industry Manufacuring. We used to produce 2.8 million to 3 million compacts, and we had more than 400 business partners of cosmetic manufacturer. Our whole group focused on the fashionability and the beauty of the product. This concept is also reflected to the design of our office building." said Mr. Nakayama. They said that the they are the first company that developed compact which is opened or closed with just a single touch of a button. They have delivered packages to the world's top cosmetics maker as "Yoshida as a compact" for half a century." 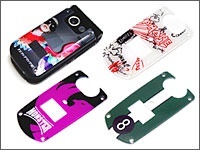 【The fine image quality for the design of the cell phone】
Manufacturing which start from the designing of decoration and ornaments is also used in the manufacturing the parts of the communications devices such as cell phone. Now, we are in the age that high performance and multiple function are required for all kinds of products. To meet these demands YOSHIDA TECHNOWORKS utilizes the advanced technology such as inmold production system, and appeals the cutting edge expressions and design. Especially, their LCD pannel for the cell phone recieves high evaluation from the cell phone manufacturer all over the world.

"We achieved both the surface hardness which is less vulnerable to the scratch, and the impact strength which is hard to break up by dropping the product, taking advantage of the original inmold process. At the same time, we developed "YK Window" which accomplished several decorating and the precise dementional accuracy. This enabled us to pass the strict quality stndard." What made thier strong point stand out was the customized cell phone cover. As we are in the age that everyone has cell phone, it is natural that the demand such as "I want to have a cell which is different from others" grows. For some core users, the customized case is a part of the fashion. About ten patterns for a cell phone are designed, and there are third party covers which are desgned by the artist or the creator. The company introduced four units of UJF-605C to respond the small lot production.

"The trigger for introducing the printers was we wanted to apply all the printing technology as our means of expression. While we were using the printers, we learned the property of UV ink, and also we realized that the white ink expands the range of the expression. Mimaki's obsession with printing and our obsession with creating matched well." The company developed the new technology, YK-DIP(Direct Image Print), which prints the full color digital image directly on the media a year and a half ago. This technology achieved the small amount production with low cost without screen plate." 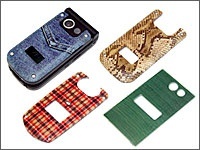 【Enhances the power of expression by customizing】
They utilize their original method such as jigs when using UJF-605C. They made software which prevents media from the dispersed ink when printing digital image on the LCD pannel. Also, now they are developing a technology which embosses a part of the ink to achieve leather-like texture. They are going to name this printing technology DIP-TOUCH. If this technology is commercialized, it will suggest a new possibility of inkjet printer.

"Dare to deal with the thing that other companies do not. This is our philosophy. The technology of DIP-TOUCH itself has already established. We are in the stage that we can commercialize by overcoming the problem with the cost and time from printing. This technology could not be created. We are grateful for Mimaki's follow up while creating the customizing technology. Also, Mimaki's attitude to solve the problem each other was appreciated. We hope we can deal with improving the printing technology and developing the new ink together in the future."